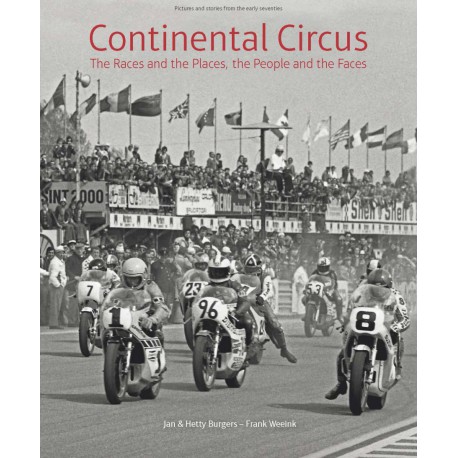 From 1970 until 1976 Jan and Hetty Burgers were part of the so-called Continental Circus that travelled from circuit to circuit. Their pictures were published in magazines all over the world. Jan and Hetty were also fascinated by everyday life in the paddock. Their cameras documented the racing community that shared a passion for racing, but away from thelimelight paddock life could be tough and cruel for riders and their families.

After meeting up with motorcycle journalist and TV commentator Frank Weeink, the idea for this book emerged - a book in which they didn't only want to portray the action on track. More than 6,000, sometimes rediscovered photos made it to the first selection and over 400 finally made it into the 192 page book. All time greats like Giacomo Agostini, Phil Read, Jarno Saarinen and Barry Sheene are featured, as are more than 20 crowd favourites like Johnny Cecotto, Kenny Roberts, Jack Findlay, Tom Herron, Dave Simmonds and Teuvo Länsivuori. The book also hails the often unseen heroes - the mechanics, the wives and the girlfriends while taking the reader on a tour to iconic tracks like Spa-Francorchamps, the Nürburgring, Hockenheim, the Salzburgring and Montjuich. On top of that, the book features chapters on crashes, sidecars, Formula 750 racing and legendary bikes from MV Agusta, Yamaha and Suzuki.

This extraordinary mix makes Continental Circus - The Races and the Places, the People and the Faces a 'must have' for every bike racing fan.