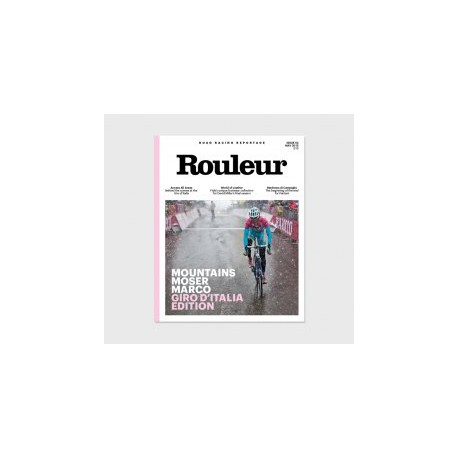 Viva Il Giro
A taste of Italy from our Danish photographer.

Retroscena: Backstage at the Giro d’Italia
Miles of cable, thousands of barriers and, because we’re in Italy, gallons of coffee. Colin O’Brien on the road at the Giro.

World of Leather: Fizik and David Millar
Designing a unique collection of race shoes for the retiring – but far from shy – Mr Millar in his final season.

Moser v Saronni
“If I can’t win I’ll do all I can to stop him,” said Giuseppe Sarroni of Francesco Moser ahead of the 1981 Giro. Marco Pastenesi of Gazzetta dello Sport meets two of the sport’s great rivals and finds them still arguing decades later…

Chairman of the Board
Some 70 board games are named after the Tour de France, but there’s only one Eddy Merckx. Throw a six to read more.

Madonna di Campiglio
The Giro only visited the climb once prior to this year – 1999, a stunning ride from Marco Pantani, but the beginning of the ill-fated Italian’s downfall.

The Church at San Biagio
The story of Magni, Coppi and la Dama Bianca, in the words of Paul Maunder.

Reynolds Cycling
Paul Lew of Reynolds is a fascinating man, starting in composite motor sports parts before moving on to bicycle wheels and UAV’s – unmanned aerial vehicles, or drones to the layman… He also believes the entire industry is testing wholly incorrectly for aerodynamics. Paul tells us why.