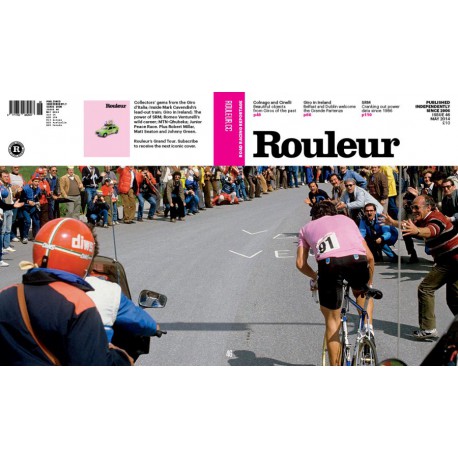 The Giro dItalia has provided collectors with beautiful objects for over a century. Rouleur tracks down ephemera from Giro history, from humble musettes to Breitling watches, to the ultimate prize: the Popes gold Colnago

The Giro begins in Belfast on May 9. Our very own Irish pair of Colin OBrien and Taz Darling head to the formerly troubled city to ask whether the Grande Partenza will translate to The Big Start. And whether the Italians will be able to get hold of a decent cup of coffee.

Fifty years after the death of Coppi, an elderly gentleman laid a wreath at his mausoleum: To Fausto, your unsuccessful student, Romeo Venturelli. Marco Pastonesi recounts the wonderful life of the man from Sassostorno, protégé of Il Campionissimo.

Andy McGrath and Timm Kölln tour Bohemia on the trail of the Junior Peace Race, finding budding Belgians and great Danes. Will any of these likely lads be the next Fabian Cancellara, winner in 1999?

If I had trained with an SRM sooner, I would have won more races Greg LeMond. Guy Andrews meets the German power meter maestros to discover why and when heart rate monitors gave way to watts.

Ian Cleverly tracks the progress of MTN-Qhubeka and the African teams mission to reach a Grand Tour. The Vuelta beckons.