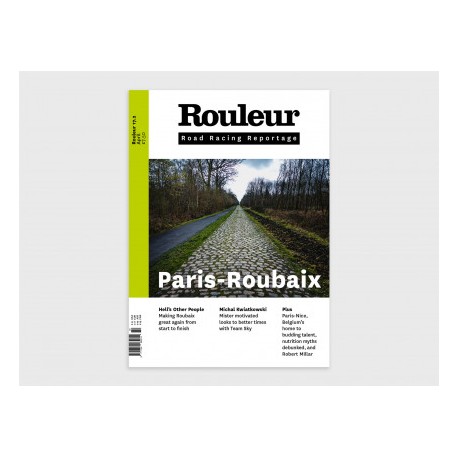 We leave no cobblestone unturned in our Paris-Roubaix masterclass speaking to a contender, a debutant, a Canadian, a directeur sportif, the Roubaix velodrome caretakers and even the broomwagon driver.

Also in the issue we speak to Team Sky's Michal Kwiatkowski, a man in Taiwan with the most extraordinary collection of racing bikes, we debunk some nutrition myths revel in the snow at Paris-Nice (the "race to the sun") and Ned Boulting visits Belgium’s house of cycling stars.

One contender, one debutant, one Canadian, a directeur sportif, the Roubaix velodrome caretakers, even the broomwagon driver… We leave no cobblestone unturned in our Paris-Roubaix masterclass.

Michal Kwiatkowski’s first season with Team Sky was a rocky affair. The Polish former world champion has learned to curb his over-enthusiasm, and will be all guns blazing for the Ardennes Classics.

In a suburb of Taipei, photographer Paolo Martelli finds a man with the most extraordinary collection of racing bikes – hundreds of famous machines from the past 40 years of design developments, and rare experiments in aerodynamics. A photo special.